The Southeastern Regional Credit Union Schools (SRCUS) has revealed a new logo in recognition of its 50th anniversary, setting the stage for a year-long celebration of the many achievements and milestones accomplished since its founding in 1970. 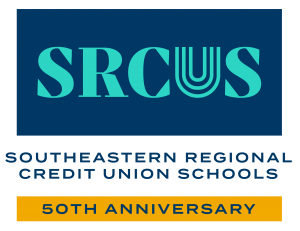 Since its early beginnings, SRCUS has produced over 1,200 SE CUNA Management School graduates from 21 states and the District of Columbia. This year’s celebration comes after a two-year delay due to the pandemic but SRCUS leaders, committee members and participants are excited to mark the occasion properly as SRCUS programs return to an in-person format.

“SRCUS was founded to develop and foster greater leaders in the credit union movement,” said Lauren DeAngelis, SRCUS advisory committee chair and chief learning officer for the Carolinas Credit Union League. “It also is intended to inspire collaboration and expanded networking of our student body. During SRCUS’ 50th anniversary celebration, we plan to celebrate and commemorate our 50-year legacy of advancing diverse and emerging leaders.”

The new SRCUS logo, which features a commemorative 50th Anniversary tagline, was created in collaboration with Grow Financial FCU’s marketing team and can be viewed at www.srcus.org or on SRCUS’ Facebook page.