Scholarship established to honor the memory of Dale P. Phillips 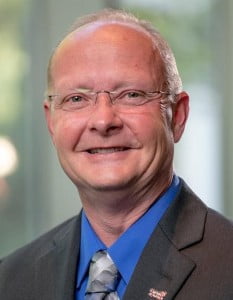 January 6, 2021 — The Southeast Regional Credit Union Schools (SRCUS) organization is pleased to announce that a scholarship fund has been established to honor the memory of ardent SRCUS supporter and enthusiast Dale P. Phillips. The Dale P. Phillips Memorial Scholarship is a triennial scholarship which will be awarded to an incoming first-year student attending the Southeast CUNA Management School held at the University of Georgia.  This is three-year scholarship, administered by SRCUS, covers the cost of tuition, registration, transportation, and other items.

Dale Phillips was a man of a million smiles and of unending credit union knowledge. With more than 25 years’ experience in the credit union industry, Dale was admired by both colleagues and members alike for his vast knowledge, willingness to help, and genuinely caring personality. Dale stood behind the credit union philosophy of “People Helping People” and valued the opportunity credit unions have to know their members on a personal level and provide a foundation for members’ financial success.

Dale began his SRCUS journey as a first-year student in 2016 and quickly became a friend to all; he never seemed to meet a stranger, and if he did, he got to know them and they became friends! Affectionately known as “Waldo” by his classmates, Dale served as Class Treasurer and was an active member of his class, always available to lend a hand with anything that was needed. In 2018, Dale completed the three-year program and upon graduation was awarded the prestigious Hugh Watson Award for leadership excellence. Dale loved his time at SRCUS, not only for the professional and personal development opportunities the program provided, but also for the relationships he developed with his classmates. And his classmates sincerely loved him.