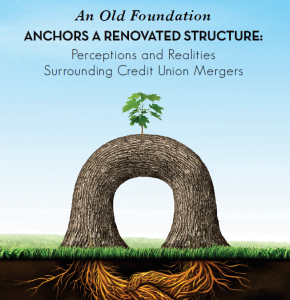 July 7, 2016 — A whitepaper discussing the positives and negatives of credit union mergers has been published by the Southeast Regional Credit Union Schools (SRCUS). The paper was authored by a team of third-year students in the SE CUNA Management School program comprised of Nathan Clough, WinSouth Credit Union (Gadsden, AL); Kim Gunter, Bowater Employees Credit Union (Calhoun, TN); Ryan Hawk, Peach State Federal Credit Union (Lawrenceville, GA); and Billy Joiner, Centric Federal Credit Union (West Monroe, LA). Completion of the written project and an oral presentation of the research report is a prerequisite for graduation from the program. This team of students received recognition at the 2016 SE CUNA Management School graduation ceremonies last month for their exceptional work on both the written paper and their oral presentation.

Current merger trends, which have led to the steady decline in total institutions and the surging average asset size, represent a paradigm shift within the credit union industry. Many factors have converged to initiate and sustain this irreversible development, and numerous uncertainties about the movement’s future remain. In this report, “An Old Foundation Anchors a Renovated Structure: Perceptions and Realities Surrounding Credit Union Mergers,” authors explore the positive impact that mergers and consolidations can have on the credit union industry when properly executed and approached in a collaborative manner rather than as a corporate annexation.

In addition to a discussion of the positives and negatives of credit union mergers, the report shares new research conducted by CUNA’s Market Research department with a group of credit union members whose institutions had previously been merged, and the results begin to give us some insight to the relationship that exists between consolidations and the member experience.

The authors posit that opportunity abounds as credit union push forward into the great unknown. And this opportunity that stands before the industry is in many ways itself a product of the existing consolidation explosion. As credit unions have come together to create scale, they have created cost advantages and have amplified the operational efficiencies with which they operate, which has increased income and allowed more capacious credit unions to spend more on advertising and brand recognition. As these larger credit unions approach equal footing with some of their banking counterparts, they possess opportunities to brand themselves as a caring disrupter and increase their wallet share relative to their members’ financial products.

To access a complimentary copy of the white paper, please visit www.srcus.org/management-school/student-white-papers/.