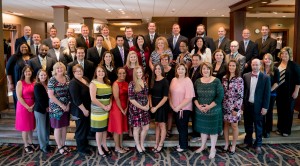 Since 1971, the Southeast CUNA Management School has equipped graduates with the skills and knowledge to meet the leadership challenges that arise in the credit union industry. The curriculum develops students’ operational, managerial and leadership abilities. Over the course of this three-year program, students receive advanced academic instruction on a variety of topics including management, leadership, and financial analysis. Students also apply the knowledge gained from the on-site sessions to projects that require strategic analysis of their credit unions and research of relevant issues facing the credit union industry.

In addition to a rigorous academic curriculum, the Southeast CUNA Management School provides students the opportunity to develop their leadership capabilities and better understand the credit union philosophy so that they can contribute to the success of their credit unions and to the movement as a whole. In the true credit union spirit of “people helping people”, the Class of 2016 participated in a volunteer outreach effort with the Food Bank of Northeast Georgia, where they recovered nearly 1.5 tons of food for families in need in Northeast Georgia. The Class of 2016 also made a $1,000 financial gift to the food bank, which translates to 8,000 meals for families in need.

Upon successful completion of the program, students received a graduation diploma issued in conjunction with the University of Georgia Center for Continuing Education. Graduation from the Southeast CUNA Management School is recognized throughout the credit union industry as a prestigious mark of achievement. For more information on the Southeast CUNA Management School, visit www.srcus.org/management.

Graduates from the Southeast CUNA Management School Class of 2016 include:

Virginia Credit Union League. Through collaboration with CUNA and Affiliates, the first SRCUS Management School was established in 1970. Since the school’s formation it has graduated over 1,100 credit union management professionals from 21 states and the District of Columbia. In addition to the management school, SRCUS also hosts an annual Director’s Conference, which provides a full range of informative educational sessions about critical issues important to today’s ever-changing financial industry for credit union directors and committee members. For more information, visit www.srcus.org.