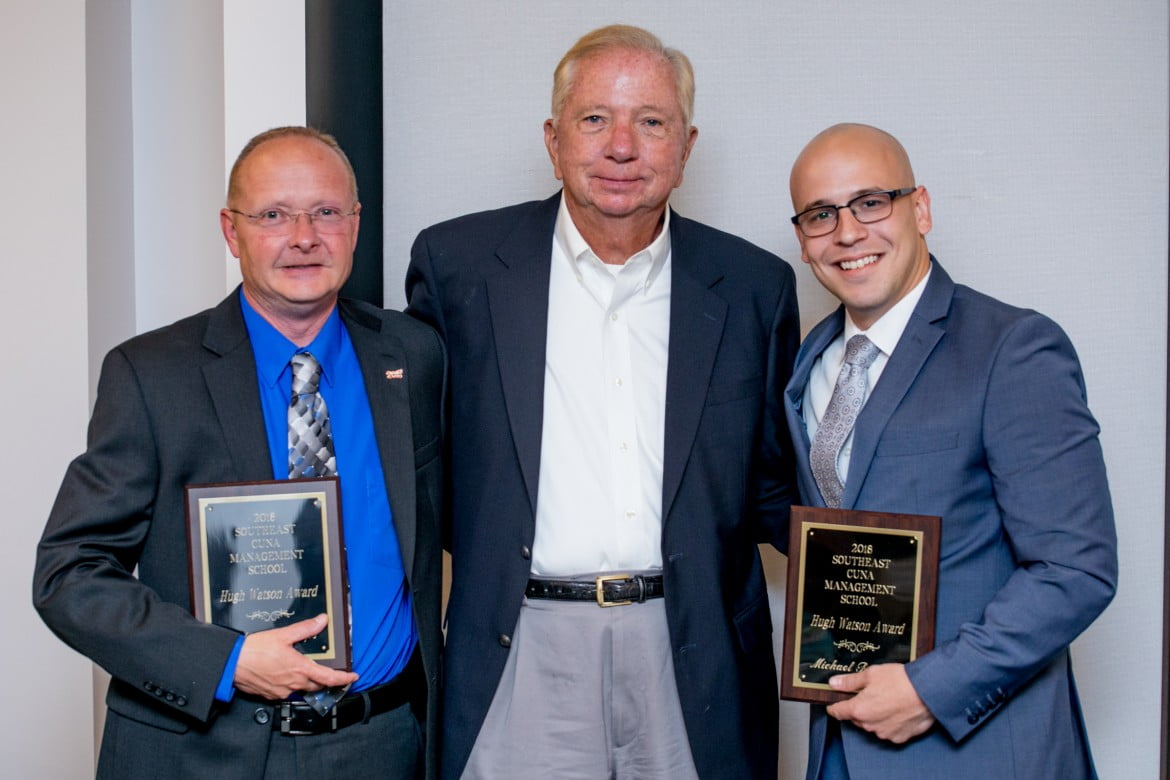 June 25, 2018— The Southeast Regional Credit Union Schools (SRCUS) organization is pleased to announce that Michael Poucher and Dale Phillips have been awarded the 2018 Hugh Watson award at this year’s session of the Southeast CUNA Management School. Selected by vote of his classmates, this is the first time two students have received the award. Both students made exceptional contributions to the class as a whole over the three years of SRCUS and demonstrated outstanding leadership skills.

Michael Poucher has been in the credit union industry for 8 years and currently serves as Financial Center Manager II at First Commerce Credit Union (Tallahassee, FL). He believes that the work credit unions do truly makes a difference in the lives of their members and communities. “I am so honored to receive this award and grateful to have had the opportunity to attend such an amazing program. Attending and completing SRCUS was rewarding and I know the experiences I have had and tools I have gained will help me tremendously in my journey as I continue to grow as a credit union professional,” explained Poucher. “The support you receive from faculty and your classmates is the same support you receive from family and that’s what you become, family.”

Dale Phillips began his career in the credit union industry more than 20 years ago at a small state-chartered credit union and currently serves members as Executive Operations Officer at Veritas FCU (Smyrna, TN). Phillips stands behind the credit union philosophy of “People Helping People” and values the opportunity credit unions have to know their members on a personal level and help provide a foundation for members’ financial success. “SRCUS has made a difference in my professional and personal development. I have stepped out of my comfort zone professionally along with my classmates,” noted Phillips. “Due to this experience, I have grown personally in a way I never expected. SRCUS is about preparing individuals for advancement and professional success while engaging them in personal interaction that forms lasting friendships even after graduation.”

Four years ago, SRCUS instituted the “Hugh Watson Award” to recognize an outstanding third year student and to honor the retirement of Hugh Watson from SRCUS. Watson joined the SRCUS faculty in 1971 and during his tenure, he taught in all 3 years, served as academic coordinator and facilitated the 3rd year simulation for 43 years. Upon his retirement from SRCUS, the Hugh Watson Award was instituted to honor the 3rd year student whose service to SRCUS has been closest to that exemplified by Dr. Hugh Watson.